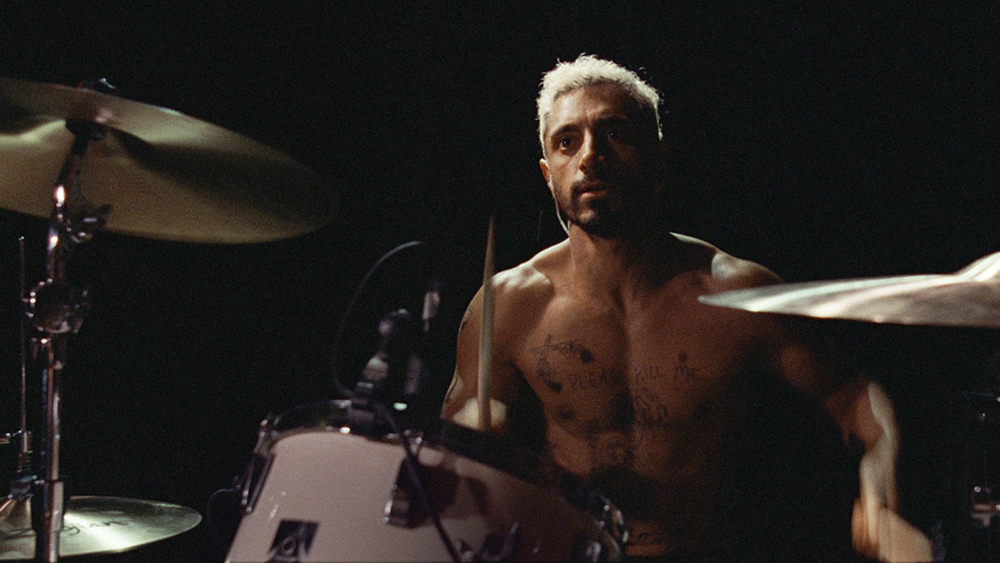 Amazon is set to find the beat with the upcoming Sound of Metal starring Riz Ahmed which hits select theaters today before moving to Prime Video on December 4.

The film marks the feature directorial debut of Darius Marder, who co-wrote the movie with Abraham Marder. Sound of Metal follows punk-metal drummer Ruben (Ahmed) who begins to experience intermittent hearing loss. When a specialist tells him his condition will rapidly worsen, he thinks his music career and his life is over.

As Ruben, a recovering heroin addict, navigates his diagnosis he runs the risk of relapsing. Enter his girlfriend and bandmate Lou (Olivia Cooke). She checks him into a secluded sober house for the deaf in hopes it will prevent a relapse and help him learn to adapt to his new situation. After being welcomed into a community that accepts him just as he is, Ruben has to choose between his equilibrium and the drive to reclaim the life he once knew.

The film made its world premiere in 2019 at the Toronto International Film Festival and as Marder said while visiting the Deadline Studio, it was a story that has been in the works for a while. “I was working on this hybrid documentary of a band made up of a man and a woman, and it was loud, and I got obsessed with this idea of sound and cinema expressed in a very emotional, intimate way. And I couldn’t let go of it,” he said.

The uber-talented Ahmed, who received an Emmy for his incredible turn as Naz in The Night Of, immediately fell in love with the script after he read it. “I thought it was amazing,” Ahmed told Deadline at TIFF in 2019. “Then I met Darius, and I thought he was insane—in the best possible way.”

He continued, “I just realized that this is a really difficult film to make, and if it gets made, it’s going to be through the sheer force of will, and the force of nature, really, that is Darius. From the moment we met, we just really clicked, and it was a daunting challenge, acting-wise. But having gone on the journey of learning to play the drums, and spending time in the deaf community, and learning how to sign, it’s just been one of the most enriching experiences of my life.”

Also making his directorial debut is Dan Friedkin with The Last Vermeer, which will be released by TriStar Pictures in over 900 theaters around the country starting today.

Written by James McGee (Band of Brothers) and Mark Fergus & Hawk Ostby (Children of Men, Iron Man) and executive produced by Ridley Scott, is based on Jonathan Lopez’s book, The Man Who Made Vermeers.

In the film, Guy Pearce plays a notorious Dutch art dealer who is accused of selling cultural treasures to Reich Marshal Hermann Göring and other top Nazis. All the while Joseph Piller (Claes Bang), a Dutch Jew, is fighting in the Resistance during World War II. Following the war, Piller becomes an investigator assigned the task of identifying and redistributing stolen art, resulting in the flamboyant van Meegeren being accused of collaboration — a crime punishable by death. But, despite mounting evidence, Piller, with the aid of his assistant (Vicky Krieps), becomes increasingly convinced of Han’s innocence and finds himself in the unlikely position of fighting to save his life.

In his review of the film Deadline’s Pete Hammond said: “…this truly is a smart cinematic adaptation that gains its greatest strength from not turning into a pedestrian and typical courtroom showdown. Debuting feature director Dan Friedkin is too smart to let it play on outwardly predictable levels, and is blessed to have an international cast of the first rank go at the material.”

Watch the trailer below.

This weekend is the weekend for directorial debuts as Matthew Rankin’s first feature The Twentieth Century is set to hit virtual cinemas today. The film from Oscilloscope Laboratories made its world premiere in the Midnight Madness section at the 2019 Toronto International Film Festival where it nabbed the Award for Best Canadian First Feature Film. It was also honored at the 2020 Berlin International Film Festival with the FIPRESCI Prize.

Set in Toronto in 1899, The Twentieth Century follows young politician Mackenzie King (Dan Beirne) who has big dreams of becoming Canadian Prime Minister. However, there is one thing that may potentially be the source of his downfall: his romantic vacillation between a British soldier and a French nurse — and his fetishistic obsessions doesn’t help.

In his quest for power, he must gratify the expectations of his mother, the hawkish fantasies of a war-mongering Governor-General, and the utopian idealism of a Québécois mystic before facing one, final test of leadership. All culminates a battle between good and evil where King learns that disappointment may be the defining characteristic of the twentieth century.

Watch the trailer below.

The streaming space has its fair share of high-profile fare starting with the first installment of Steve McQueen’s Small Axe on Amazon Prime Video.

Taking its name from the African proverb, “If you are the big tree, we are the small axe”, the anthology series of five films are set from the late ’60s to the mid-’80s and tells personal stories from London’s marginalized West Indian community.

The first film, Mangrove kicks off the anthology and follows Frank Crichlow (Shaun Parkes), the owner of the titular Notting Hill Caribbean restaurant, Mangrove. The locale is a lively community base for locals, intellectuals and activists. In a reign of racist terror, the local police raid Mangrove time after time, making Frank and the local community take to the streets in peaceful protest in 1970.

Searching filmmaker Aneesh Chaganty is back to bring us thrills with Run starring Sarah Paulson and newcomer Kiera Allen. the thriller dropped on Hulu today.

For Run, Chaganty reteams with Searching co-writer Sev Ohanian to deliver a Hitchcockian pic blended with the dangers of Munchausen by proxy like we have never seen before. Allen stars as Chloe, a wheelchair-using, homeschooled teenager who has been raised in isolation by her super-controlling mother Diane (Paulson), who from the jump is a little too extra. This is already a recipe for something very sinister.

As the story unfolds, Chloe begins to uncover bits and pieces of a secret that leads her to believe that her mother is holding a bigger and darker secret from her. Spoiler alert: Diane is definitely hiding something.

The film moves the needle in terms of representation by casting Allen a wheelchair-using actress. As Hollywood attempts to increase its efforts in the diversity and inclusion space, Run gives the film more authenticity by casting Allen. “I was told recently that this is the first thriller to star an actual wheelchair user since the 1940s,” Chaganty previously told Deadline. “That statistic is insane, and pretty much answers the question of ‘Why was it so important to cast with authenticity?’ for itself.”

Currently streaming on Netflix is Takeshi Fukunaga’s Ainu Mosir, which is the second title from the filmmmaker acquired by Ava DuVernay’s ARRAY Releasing. In 2015, ARRAY distributed his first film Out of My Hand which was nominated for the John Cassavetes Independent Spirit Award.

Ainu Mosir follows 14-year-old Kanto as we are introduced to the centuries-old traditions of his Indigenous village. Between the unconventional Ainu traditions, Kanto’s upbringing, his desire to leave his hometown, questioning longstanding beliefs and grappling with the loss of a parent, the story tackles universal themes with rich cultural specificity.

Speaking of authenticity, the main cast and story come from the actual lives and life circumstances of one particular community of Ainu people living by Lake Akan in Hokkaido, Japan. The project was developed in close communication with members of the community, developing characters and the plot together with them. To add to that, all of the cast members are Indigenous Ainu non-actors with the exception of a few professional Japanese actors who played the Japanese characters in the film. This is what representation looks like.

Legend Jackie Chan is back in action with the Vanguard directed by Stanley Tong. The Gravitas Ventures movie marks the ninth collaboration between Chan and Tong and opens in the U.S. and Canada at select drive-ins and IMAX theaters starting today.

The film was shot in nine cities across five countries includling London, Dubai, Zambia, India, and China (I’m guessing this was shot pre-COVID). The title of the film comes from the covert security company featured in the film. Vanguard is the last hope of survival for an accountant after he is targeted by the world’s deadliest mercenary organization. The film also stars Yang Yang, Ai Lun, Mu Qimiya, Xu Ruohan and Zhu Zhengting.

The actioner, which opens today in theaters and on demand and digital follows an ancient order of Jiu Jitsu fighters face a vicious race of alien invaders in an epic battle for the survival of Earth. Nicolas Cage. Tony Jaa. Alien invaders. What more do you need?

There is no shortage of documentaries out this weekend. Abramorama has two debuting today starting with Soros directed by Jesse Dylan and opening in home cinemas.

Soros follows billionaire activist George Soros who is influential and, at the same time, controversial. Famous for betting against the Bank of England in 1992 and making a billion dollars in one day, he is maligned by ideologues on both the left and the right for daring to tackle the world’s problems and putting his money behind his fight – from free elections and freedom of the press to civil rights for minorities. Dylan was given unprecedented access to the titular figure and his inner circle. The film follows Soros across the globe and pulls back the curtain on his personal history, private wealth, and public activism.

Abramorama will also release Michael Arlen Davis’ The Test & The Art of Thinking today on VOD. The docu puts the college entrance exams the SAT and ACT under the microscope to examine exactly what these tests measure, what role they play in the admissions process and how predictive they are of academic success.

The exams and the multibillion-dollar test-prep industry have become the topic of debate over equity in educational opportunity. The Test & the Art of Thinking takes a look at this controversy through interviews with students, parents, counselors, test-prep professionals and academics, to provide an insightful look at these tests and how it reflects deeper issues in our educational system.

Alexander Nanau’s critically acclaimed documentary Collective debuted in 2019 at the Venice International Film Festival before playing at the Toronto International FIlm Festival and Sundance. Collective follows a team of journalists as they uncover shocking, widespread corruption. After a deadly nightclub fire, the mysterious death of the owner of a powerful pharmaceutical firm, and the quiet resignation of a health minister — seemingly unrelated events — the team of intrepid reporters exposes a much larger, much more explosive political scandal.

Also opening this weekend is the revenge thriller Girl starring Bella Thorne and Mickey Rourke; the racially charged crime thriller Blindfire; as well as Ema Ray Yamazaki’s baseball docu Koshien: Japan’s Field of Dreams. And right before Thanksgiving, Gravitas Ventures will release Joan Carr-Wiggin’s comedy-drama on Getting to Know You on November 24.